What Was Your Favorite Moment of Experience? Relive The Event Now On Demand! Watch Replays

What is gRPC Performance

gRPC is an open-source Remote Procedure Call system focusing on high performance. There exist several gRPC benchmarks including an official one, yet we still wanted to create our own.

Why would we torture ourselves doing such a thing?

So with those points in mind, we created a completely open-source benchmark where everyone is welcome to contribute and which could be run with a single command, having only Docker as a prerequisite. Each implementation can be improved by the community so the results can be objective.

We managed to collect several domain experts from different technologies – including Java, .NET, Scala and Erlang. Their contributions made the entire benchmark more realistic and objective. Occasionally, they even found a bug in the framework implementation!

The repository got quite popular on Reddit and Hacker News. It was also mentioned in a Microsoft Blog post. Using the feedback from all those sources, we strived to make the benchmark even better, e.g., including more statistics, making several aspects of the test suite configurable and adding a warm-up phase.

The stats from docker and ghz are then collected, parsed and combined by a Ruby script to be presented in a table with the language/library name, requests per second, average latency and 90/95/99 percentiles.

The process is summarized in the diagram below. 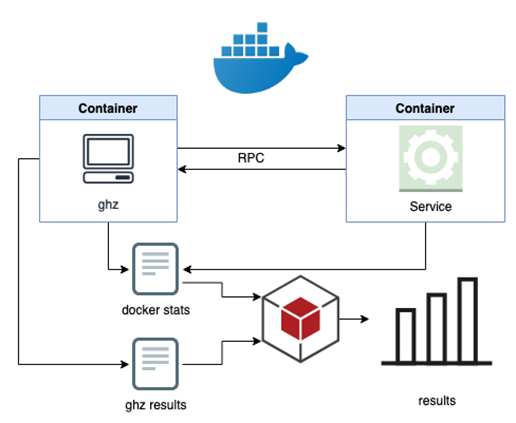 During the benchmark development we bumped into several challenges that molded the final shape of the project.

In most programming languages you can do some tricks to improve your program performance at the cost of readability and/or portability. While those are interesting and would boost the performance of some implementations, we decided to prohibit them. The benchmarked service should be written in an idiomatic way (for the language used) so it can be easily maintained and extended. Just like we write our code at Nexthink!

The work that is done with each request is a simple unary call – it’s basically an echo service. What a real-world service would do is most likely more interesting – like fetch an asset from the database, compute something non-trivial or act as in-memory cache.

It should be noted that the below metrics represent the gRPC/Proto layer only. In a real-world scenario, the service logic will most likely be more resource / time consuming. We are not claiming you’ll reach huge performances using Rust, C++ or Scala for your next micro-service project.

We decided to go with the simple approach to:

This one is more challenging than it seems. We needed to supply a common environment for all technologies to perform well. Adding a warm-up phase to negate the initial cost of JIT (which makes sense as most server applications are long-running processes) or exposing parameters such as to fine-tune the benchmark for one’s specific needs were important pieces of our setup.

With the hardware at our disposal and the concept of running the entire benchmark solely using the local machine, we were able to only benchmark services up to the limit of 2 CPUs. To generate enough traffic, we had to use 9 CPUs on the client side.

In this section we illustrate the benchmark results published in our github wiki. Before diving in, we must talk about two fundamental aspects: the hardware and the workload.

All tests were run on the following physical machine:

We ran two tests to benchmark the server implementations using one and two CPU cores. Aside from the server’s CPU, the benchmark’s configuration is always the following:

In this section we analyze the throughput and the latency percentiles of various gRPC server implementations written in the most popular programming languages. In case a given language has more than one implementation, we pick the most efficient one.

The full results can be found here: https://github.com/LesnyRumcajs/grpc_bench/wiki/2020-08-30-bench-results

The first place in this test is taken by the rust (tonic) gRPC server, which despite using only 16 MB of memory has proven to be the most efficient implementation CPU-wise.

Then, we have the group of ‘heavily optimized’ garbage collected implementations: Scala (240 MB of memory), Java (105 MB of memory) and .NET (93 MB of memory).

At the bottom, not surprisingly, we have a trio of scripting languages: Python, Ruby and PHP. Note that the C++ server has the second lowest memory consumption (8 MB) and a more than decent throughput. The most lightweight server is the Swift gRPC taking only 6 MB of memory.

All language implementations were fully using the allocated core.

The latency measurements follow the same pattern as the previous graph. In general, servers with higher throughput have also lower latency; exceptions are Scala, Kotlin and Go, all having a significant spike in p99 latency (meaning, 99% requests should be faster than the given latency).

When we allocated two CPU cores to each server, the benchmark produced vastly different results. Scala is now on top, albeit with a not excellent memory consumption (242 MB). At the next four spots, we have both garbage collected languages and manually memory managed languages. The only difference is the memory usage: C++ and Rust stay quite low, at around 10-30 MB, while Java and .NET reach 200 and 150 MB respectively.

Go’s performance improved drastically with the addition of more CPU cores. On the other hand, Node.js is limited by the fact it can’t use more than one core.

At the bottom there are scripted languages again. Some of them can’t really make use of an extra CPU (Python, Ruby) or are quite inefficient (PHP).

Even on multiple cores, the fastest servers have a good latency profile as well. C++ and .NET are doing particularly good with a p99 latency of only ~42 milliseconds. Rust (tonic gRPC) is instead showing the worst latency profile than comparable .

Slower implementations are overwhelmed and appear to be unable to cope with the number of requests.

To show how much the benchmark is influenced by the workload, we have run two additional tests with tweaked configurations.

The alternative test tries to emulate a workload with many clients making very few small requests each: 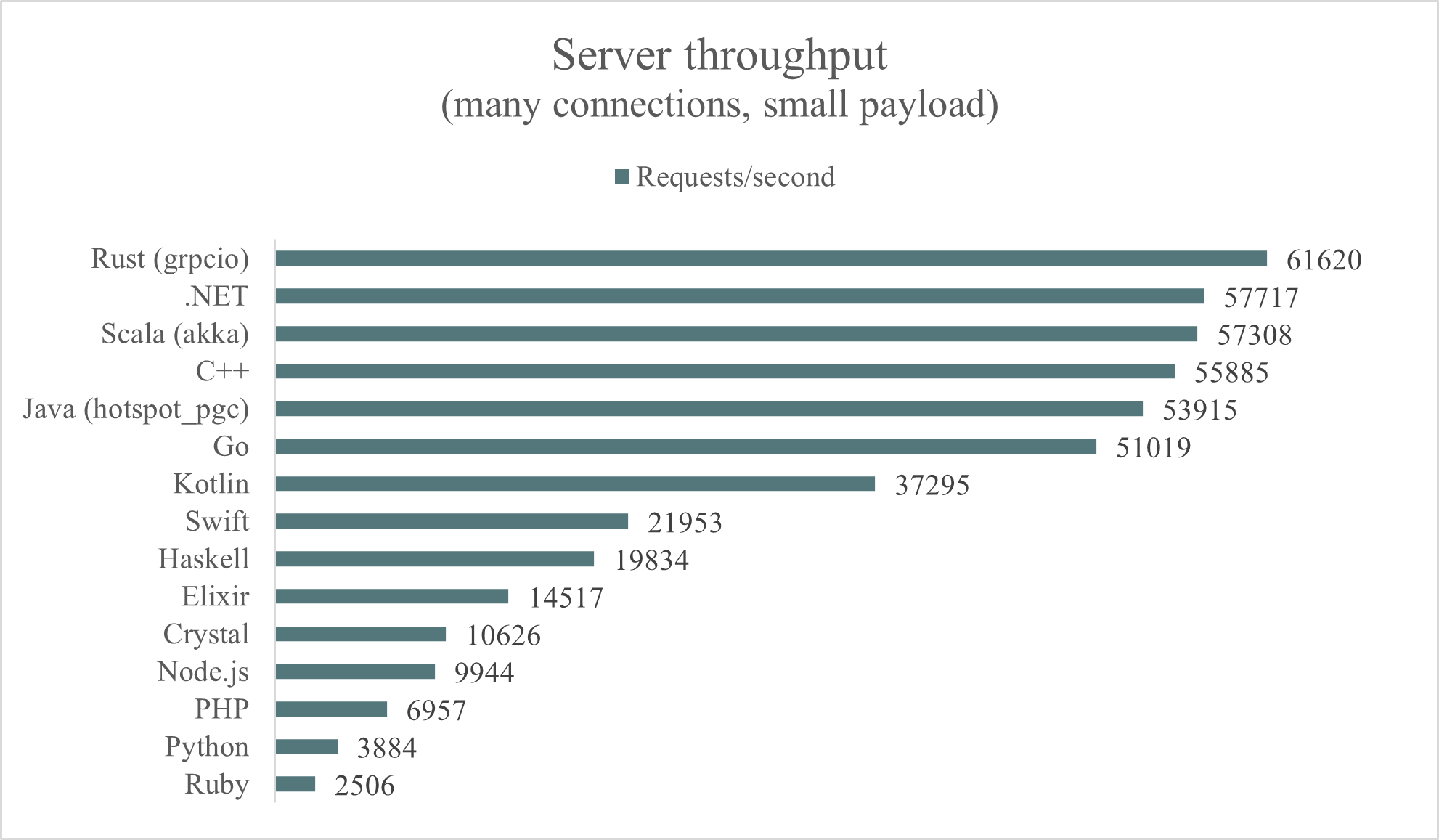 As you can see the results change a lot depending on the workload.

What did we learn?

Benchmarking is hard. Providing a common framework able to objectively compare different technologies with all their quirks requires collaboration with experts.

On the topic of gRPC performance, it is often more influenced by the library implementation than the programming language used, an example being Scala Akka achieving 1800% better performance with just a version bump. Therefore, if you care about efficiency of your service, you should not only carefully pick the programming language, but also one of the many libraries the ecosystem offers.

Nevertheless, we can draw some general findings in terms of gRPC performance:

It is important to note that you should benchmark with the workload and hardware you expect to have in your production environment. Going beyond, proper documentation and active community is no less important when it comes to choosing your direction. After all, you don’t want to end up building your product on a technology that may get abandoned within a year or two.

The Total Business Impact of IT performance